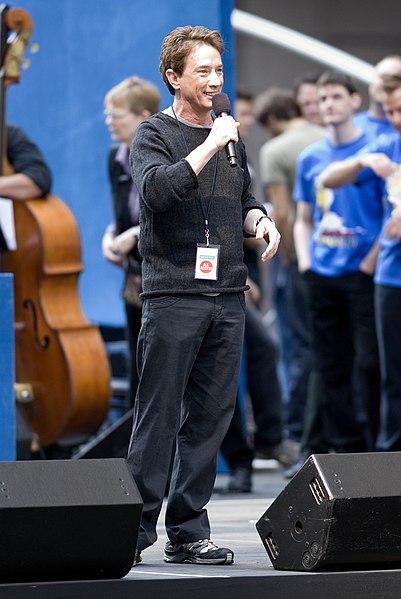 I barely remember part of four dreams from last night, with the first dream taking place in a slightly fictional version of D during the day, and I was sitting in my parent’s old automobile waiting for my mom & some of my brothers who were in a store or office or something like that.

The area was slightly like downtown D but different and less cramped, it was a nice day outside like a Saturday or something like that, and at some point a man opened the door to our automobile; and he sat in the driver’s seat, and I sat there watching surprised.

He said that he was not paying attention when he accidentally entered our automobile, but then my mom and some of my brothers returned to the automobile; and the man recognized my mom, and she recognized him, and we all started talking about what had happened and about how he knew my parents.

The man looked like the comedian Martin Short and after a brief conversation he offered to drive us around to all the places that we needed to go in our automobile, and then he would drive back to his automobile; and we would all say goodbye, it was his way of making up for accidentally entering our automobile, and it was everyone’s chance to update each other on how we all had done in the years since we had last met.

We accepted his offer and I remember him driving us around the city and he drove faster than anyone in my family, but not fast enough to scare us too much; and I remember passing W Park at some point, and then he drove back to his automobile when our trip was finished.

We talked the entire trip and now that it was finished we said our goodbyes, and he walked to his automobile as my mom or I were about to get into the driver’s seat of our automobile to drive home; but I woke up.

The second dream involved me signing up for school and going to the first day of school, and I remember going to one or more classes; but I only remember one class somewhat clearly, and it was taught by my former choir teacher Mrs. J. (No I never was in the choir, but in 2nd and/or 3rd grade we would briefly go to choir class about once a month sometimes, and no I can not sing 😀 )

Some of my former classmates were in this class, and I remember wondering how many classes did I have left for the day; but I was not sure where my class schedule was, but I woke up at some point.

My third dream took place at my parent’s house and I ordered pizza, maybe shortly before the pizza place closed, and they delivered it to the house; and the delivery person was a woman with brownish colored skin with black colored hair wearing a do-rag, a big long shirt, baggy pants or shorts, and she looked/talked/acted  in an Eastside wannabe thug (gangster)-like way.

From the beginning there was a big mistake made on her part that I can not remember and so we had to  deal with/fix that problem first, then when I went to pay for the pizza she needed me to give her some extra money so that she could give me change since she did not have the right about of coins & so I had to give her two or three pennies, and after I thanked her & said goodbye she would not leave until I gave her a tip & so I gave her a tip. 😀

She was very unprofessional the entire time but it was an interesting experience, though a bit annoying, and as she was finally leaving another female pizza worker drove up; and I remember saying something and/or using hand signals to communicate with her about something that I can not remember, but I woke up.

My last dream took place at the school again and I went to the bathroom to urinate and a former schoolmate of mine who was mentally handicapped and looked a bit like Egon Spengler from the animated television show The Real Ghostbusters, came into the bathroom, and he was walking around messing with the sinks/stalls/watching me/et cetera.

I greeted him and I continued trying to use the bathroom, but I could not since I was uncomfortable probably, and he kept going around doing the same things over & over; and so I started to repeat myself as well by going to the urinal, then the stall, then the sink, and then toward the door but I would turn around & do the same thing again.

Like I said before the other student would look into your stall and/or at you as part of his cycle of activities, and so he looked in on the female student as well as she sat on the toilet; and I remember her jokingly saying something to him but at the same time she gave him a warning, and I think that the other two male students looked over the stall at the female student too to be annoying.

They all were goofing around and talking the entire time, but I still might have said something to them about not looking in on people while they are trying to use the bathroom; and while the other student was distracted by them, I finally probably used the bathroom, and then I left to find what class I was supposed to go to.

I had no idea what class or classes to go to, and so I just walked where I felt was correct; and I reached the class from the second dream that my former choir teacher Mrs. J was teaching, and I knocked on the door.

I remember asking LM if I had been to this class before already because everything seemed very familiar like I had already done this before, but LM turned around looking at me with her serious/focused face without saying anything; and then she turned back to listen to what Mrs. J was teaching without answering my question.

JB was acting hyper and not paying attention to Mrs. J, who had to tell JB to pay attention, and he did not hear me when I asked him the same question that I asked LM; and so I sat there confused and I continued looking for my class schedule, but I woke up.