The song Ironic by Alanis Morissette from her 1995 music album Jagged Little Pill.

Here is how Wikipedia describes this song:

“Ironic” is a song by Canadian singer Alanis Morissette.

It was released in February 1996 as the third single from her third studio album, Jagged Little Pill (1995).

It was written by Morissette and Glen Ballard, and was produced by him.

“Ironic” is a song written in the key of B major, and includes a moderate tempo of eighty-five beats per minute.

The lyrics present several situations that are described as “ironic”; this has led to debate whether any of these actually match the accepted meaning of irony.[1]

It also reached the top five in Australia, New Zealand, and Norway.

In the United States, the song reached number four on April 13, 1996, and since then it has been her highest-charting single on the Billboard Hot 100.

“Ironic” was certified gold by the Recording Industry Association of America (RIAA).

The song won the Juno Award for Single of the Year, and received two Grammy Award nominations in 1997, for Record of the Year and Best Short Form Music Video.

In it, Morissette drives through a winter landscape, and she plays multiple roles as her passengers.

MTV nominated the music video for six MTV Video Music Awards in 1996, winning three of them.

“Ironic” was written by Alanis Morissette and Glen Ballard, and produced by the latter for her third studio album, Jagged Little Pill (1995).[3]

In an interview with Christopher Walsh of Billboard, Ballard explained how he and Morissette met, and how “Ironic” was written.

He commented: “I’m telling you, within 15 minutes we were at it— just writing.

‘Ironic’ was the third song we wrote.

Oh God, we were just having fun.

I thought, ‘I don’t know what this is—what genre it is—who knows?

According to the sheet music published at Musicnotes.com, it is a song set in the time signature of common time, composed in a moderate tempo of eighty-two beats per minute.[5]

It is set in the key of B major with Morissette’s vocal range from the tone of E5 to B♭5, and “Ironic” chord progression starts with the sequence of Emaj7–F♯6–Emaj7–F♯6, before changing to F♯–Badd9–F♯–G♯m7 in the chorus.[5]

Such Pretty Forks in the Road out July 31st https://alanis.lnk.to/suchprettyforksintheroad

END_OF_DOCUMENT_TOKEN_TO_BE_REPLACED

I had a dream that possibly involved my female coworker JB, maybe Alanis Morissette, and a somewhat older female musician with light-color skin with gray/yellow hair whose name I can not remember.

The unknown female musician had gotten a group of fans together to make a music album with her as part of an experiment, the fans played the instruments et cetera, and she did the singing; and the music album was recorded in a large room.

END_OF_DOCUMENT_TOKEN_TO_BE_REPLACED

I can only remember some of the end of this dream, my mom was in an earlier forgotten part of the dream, and the end of the dream took place at a school and I seemed to maybe be in high school again even though everyone else and I in the dream were probably adults.

I remember going to the men’s bathroom pushing a somewhat bathroom stall-like cart that carried some objects, there were too many objects for me to carry at once so I was using this stall -like cart to hold them, and several people entered the bathroom as I was about to walk into one of the bathroom stalls to urinate.

One of the people looked like a woman wearing makeup with dark-color skin with long black hair wearing a nice small dress at first, I was about ask them if they had entered the men’s bathroom by mistake (I did not have a problem with a woman using the men’s bathroom), but then I quickly realized that this was probably a man dressed like a woman wearing makeup and probably wearing a wig and he looked a bit like RuPaul with less makeup and a smaller wig so I did not say anything because I assumed that this was not a mistake.

The assumed cross-dressing man went my stall-like cart like he thought that it was a bathroom stall, and so I tried to let him know that it was not a stall by signaling and trying to keep my stuff on the cart without saying anything at first but that was not working but I can not remember what I did or said.

I possibly let him use the stall that I was about to use, but I can not remember if I stayed to wait my turn to use the bathroom or if I left.

This female classmate and me had some fun and we had an interesting conversation and I thought that she was interesting, but I was not sure if she was interested in me or not and if we could ever have a deeper relationship or not.

Because of that and / or for some other reason I ended up focusing on two other female classmates who I found to be more physically attractive, there was something sexual about them that I can not remember, but I did not find them as interesting as the other female classmate and my interest in them was just physical mostly.

I remember us being in a classroom, I briefly talked with my former male classmate SM, and then I started talking to the two sexually and physically attractive female classmates trying to decide which one I liked better.

I do not remember seeing a teacher, it was just us students talking in the classroom, and at some point my interesting and fun female classmate walked over distracting me from the two other female classmates.

I said something back to her like maybe: “Oh really.” and I probably said a few other things flirting back playfully a bit like Lucifer Morningstar from the television show Lucifer. 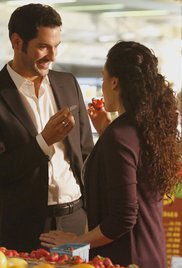 She walked over with a short red licorice (liquorice) stick, like a Twizzlers, and she used the licorice stick to hint something by turning it sideways and pushing it up against one of her finger tips like she was hinting at sex and / or two people coming together.

She was making eye contact with me and was smiling and she was still being playful and seductive with her body language and facial expressions, and she sat down at desk behind me as we continued to make eye contact and smile.

She handed me the red licorice stick wanting me to eat it, and so I started eating it and it tasted like maybe cherry or strawberry licorice and the texture was realistic.

As I was doing this I was thinking about whether I felt that a relationship between us would work and last, I thought about various details about her appearance and personality and who she reminded me of, and I thought about how she might look years from now.

I woke up as we continued flirting with each other.