The 1942 oil on canvas painting Nighthawks by the American artist Edward Hopper.

END_OF_DOCUMENT_TOKEN_TO_BE_REPLACED 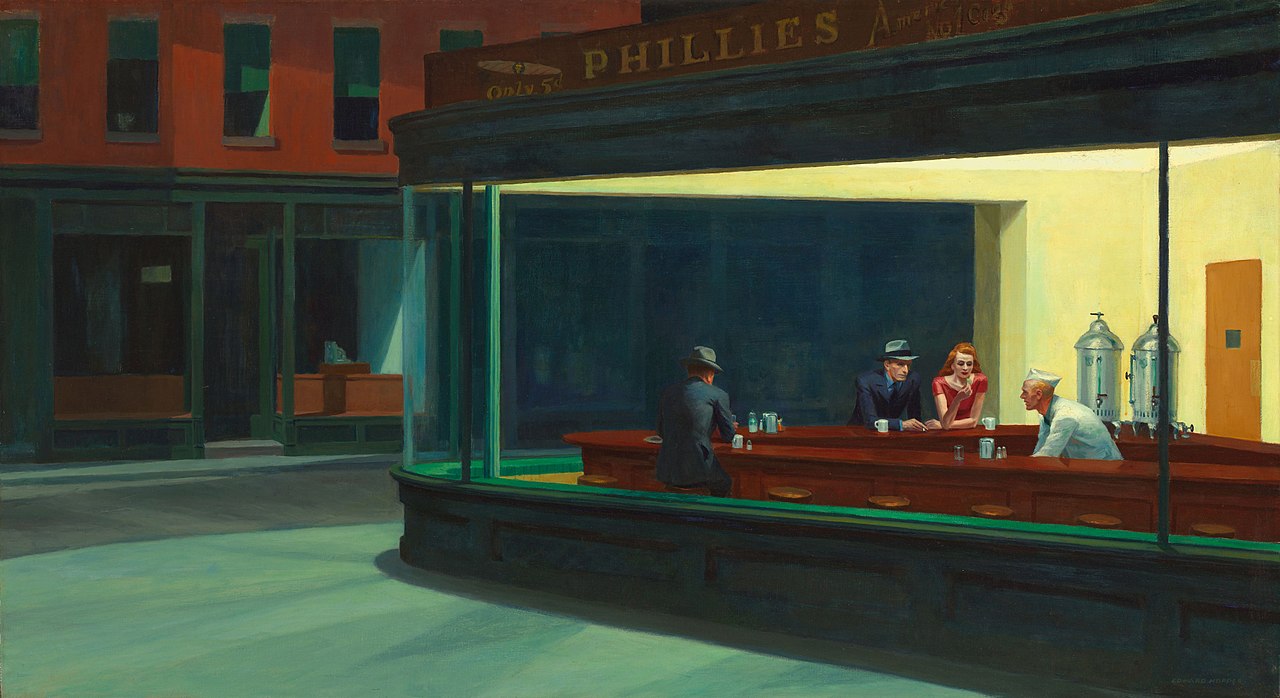 The end of this dream took place at a fictional possibly windowless dimly lit modern version of The BP Library, and I was there working at my job and I possibly left and returned there at least once during the dream.

It was time to choose and do professional development at work, and I was still not sure what I wanted to do yet.

The library did not even look like a library, at least the areas that I remember seeing, and one very dimly lit room looked like it had a swimming pool in the middle of it.

A fictional thin male coworker of mine with light-color skin with maybe wild orange / brown hair was possibly swimming and / or doing something else, and maybe for his professional development he chose to attach some kind of unknown technology and / or pieces and joints / whatever to his body like someone attaching things that will allow them to add shelves and other kinds of attachments.

After leaving that room I went to another room to talk to my female coworker CR about trying to choose something for professional development, and our supervisor Mrs. JM walked over to talk to me and she walked me to another area to talk.

Mrs. JM wanted to talk to me about professional development, she heard that I was going to paint a painting by some male artist that I never heard of before, I told her that was inaccurate but the painting that she mentioned reminded of the painting Nighthawks by Edward Hopper and that would be cool to paint if I knew how (also painting did not seem like it would be something that would count as professional development for our shelving department, and so I was confused by how that would even be an option).

Mrs. JM said that she wanted to do the same strange unknown technology / attachment-like stuff that my fictional male coworker had done earlier for her professional development, and she had me help her do this.

She attached the things / joints / attachments / whatever along her legs, across her waist, and maybe to her shoulders along the sides of her body and / or across her collarbone(?).

After helping Mrs. JM do this I saw who I assumed (I mostly saw them from behind, and maybe I only briefly saw them from the front when they turned a corner) to be my female coworker JB and her daughter W and maybe her youngest son walking by, they were wearing matching chain necklaces, they had matching red / brown hair dye in their hair, and matching attachments / joints / things along their collarbones which was what JB had chosen for her professional development.

Mrs. JM then told me that some people complained that JB did not do enough for that to count as professional development since others had added more attachments / joints / things / whatever than she and some of her children did.