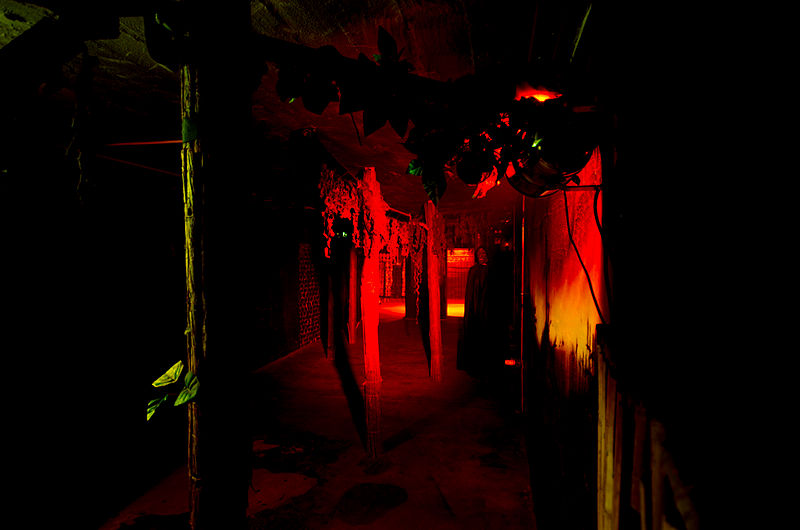 Last night I kept getting awakened by someone because I kept snoring (which kept interrupting my dreams and sleep), I never voice recorded the dreams that I would remember each time that this happened, I was tired and sleeping well and it was cold, and so now I can not remember most of my dreams except for barely part of one dream that was interesting but it is not so interesting now because I have forgotten most of it.

This dream possibly took place at a multi-story college-like hospital/apartment/dorm-like building where I was possibly moving into or living, and there were other people moving in there and living there and maybe some or all of them were college students but I can not remember.

I remember hearing people tell stories about supernatural and/or paranormal things that were said to have happened in this part of the building in certain rooms, and certain rooms were said to be haunted by maybe spirits/ghosts and/or some kind of entities.

I heard stories about several incidents that happened in some of the rooms years ago, it was said that those rooms were still haunted, and so I started trying to investigate this.

During my investigation it did seem that something supernatural and/or paranormal was possibly going on, I remember feeling that something was not right, and maybe I saw and heard some strange things but I kept an open mind and I did not jump to conclusions.

There were some interesting things that happened during my investigation around this area as I walked around near and/or in certain rooms, but I can not remember the details now unfortunately other than I possibly saw and/or heard and/or communicated with a ghost/spirit/entity who possibly confirmed that different rooms were haunted by various ghosts/spirits/entities.

One of the rooms was said to be the worst or most haunted, it was said that maybe a powerful ghost/spirit/entity was haunting that room, and so people avoided it.

At the end of the dream a woman with medium-dark brown skin with black hair arrived to pick her dorm/apartment room, at the time a man had just finished warning me about the most haunted/dangerous room, and I possibly warned the woman that some of the rooms were possibly haunted but she was possibly on a mission to investigate and face this herself so she was not afraid.

I kept a distance watching to see which room she would pick so that I could give her a specific warning about whichever room she picked, I was also keeping a distance because I was not sure how far from the rooms could the assumed spirits/ghosts/entities go, and I did not want them coming after me and I wanted to investigate them from a distance for now until I figured out what I was dealing with and how could I defend against them.

The woman started walking to the most haunted/dangerous room so the man who had warned me about that room ran to warn and stop her, the woman entered the room before he could reach her, and I felt danger and something powerful and that something was not right so I hide around a corner watching from a distance.

The man knocked on the door and the woman answered but the woman acted differently and I felt that she was possessed by the spirit/ghost/entity who haunts that room, and he went to warn her but then the assumed to be possessed woman responded with a different sounding voice and she killed him.

I continued hiding until she closed the door again, I sneaked away to think about what to do, and I wondered if people’s spirits/souls/ghosts get trapped in this building if they die and so I wondered if the spirit/soul/ghost of the man who was killed was now haunting this building too or not.

I wondered if there was something special about this building that was causing these hauntings, I probably thought about the television series American Horror Story, and I wondered if what was going on here was a bit like some of the things that happens on that television show.

I assumed that the spirit/ghost/entity who was possibly possessing the woman could now leave the room and go almost anywhere she wanted using the woman’s body, and so I assumed that the situation was bad and I needed to be careful but also focus on watching her to see what she does while continuing my investigation to figure out what was going on and how to deal with it.

I woke up as I was trying to figure out what to do.

A bit after 3 AM this morning I was awakened from my dream not feeling well, I felt sick to my stomach like something that I ate was probably making me sick and that I was going to have diarrhea, and so I got out of bed to drink some water and apple cider vinegar and to use the bathroom to try to get as much of it out of my body and hope that I can get back to sleep and wake up feeling somewhat better before work.

I had already went to bed an hour later than I should have so I was not going to get enough sleep for work as usual, this interruption made things worse, and so I lost even more sleep time and it caused me to forget most of my dreams.