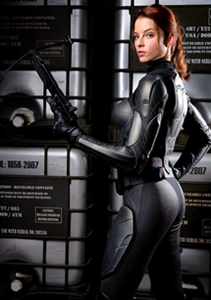 Last night I remembered one dream and a dream fragment, the first dream took place in an open area on side of the road leaving D to LC.

I was standing with two women and another man, we seemed to be soldiers in training or something, and my dad was the drill sergeant.

The current training session involved submission wrestling and one woman & I watched as the other woman & man sparred against each other, and my dad was the referee.

The woman had red hair and looked somewhat like Scarlett from the movie G.I. Joe: The Rise of Cobra, and she was winning most of the match.

Every now and then my dad would look away at something, and the man would cheat by using a knife.

He would not stab her with it hard, but he would use the knife to get her to let go of her submissions.

The match was over and the woman told my dad that he had cheated, the other woman and I told him that the man had cheated as well, but my dad still would not change his decision.

He ordered us to be quiet, everyone got quiet except for me, and I started to argue with my dad.

He was being stubborn and would not back down, so I gave up, and then I woke up.

The next dream is just an unclear dream fragment, I just partially remember a situation involving a girl, but I can not remember the beginning.

I just remember three henchmen following the orders of some powerful/rich/important man, and I think the girl was his daughter but I am not sure.

I think she had run away from home and they were sent to find her, and bring her back; but I could be completely wrong, that is just a guess.

At some point they found her and somehow I was in the dream, and I rode in the motorized RV that the henchmen were driving; I did not seem to work with them, I guess I somehow had been at the place where they first found the girl and maybe I went along to make sure she would be safe, I have no idea.

The henchmen leader looked like a shorter version of Eric Northman from True Blood and the other two henchmen looked like the Wet Bandits from Home Alone, but they both were fat & not too smart it seemed.

At some point they were driving near a store when the girl jumped out of the RV and ran into the store to escape, so the three henchmen went inside to find her.

I was going to go help her possibly escape once I found her or wait until they found her and then help her escape somehow maybe, because I was starting to think that something was not right about the situation and there had to be a good reason that she did not want to go back to where they were taking her.

For some reason I only had pajama pants on, so I looked around the RV for some jeans or something, but I could not find any.

As I was still looking, some unknown kid came into the RV and started looking at stuff while talking on a mobile phone.

He acted like he did not see me and was looking around like he was trying to find something that he wanted to steal or something.

I wanted to go in the store, but I did not want to go in pajama pants, just like I would not do in real life; I then decided to wait until the henchmen got back, but I woke up.