All that I can remember of this dream is that I was traveling during the day, I assume, and at some point I possibly met Krysten Ritter.

Later I remember feeling somewhat sick, one symptom was that I possibly felt like I had a fever, I remember going to a park, and I remember wondering if I had COVID-19.

END_OF_DOCUMENT_TOKEN_TO_BE_REPLACED

Here is how Fandom describes this TV show:

The First Season of Jessica Jones premiered on November 20, 2015, on Netflix.

Ever since her short-lived stint as a Super Hero ended in tragedy, Jessica Jones has been rebuilding her personal life and career as a hot-tempered, sardonic, badass private detective in Hell’s Kitchen, New York City.

Plagued by self-loathing, and a wicked case of PTSD, Jessica battles demons from within and without, using her extraordinary abilities as an unlikely champion for those in need… especially if they’re willing to cut her a check.

This is how Metacritic describes this TV show:

Summary: Former superhero Jessica Jones (Krysten Ritter) has opened a detective agency called Alias Investigations and meets Luke Cage (Mike Colter) on one of her cases as a man (David Tennant) from her past resurfaces.

END_OF_DOCUMENT_TOKEN_TO_BE_REPLACED

During the fight they decided to do a dangerous stunt where they set part of the ring on fire, and Mr. Flair’s opponent slammed him in the fire.

END_OF_DOCUMENT_TOKEN_TO_BE_REPLACED 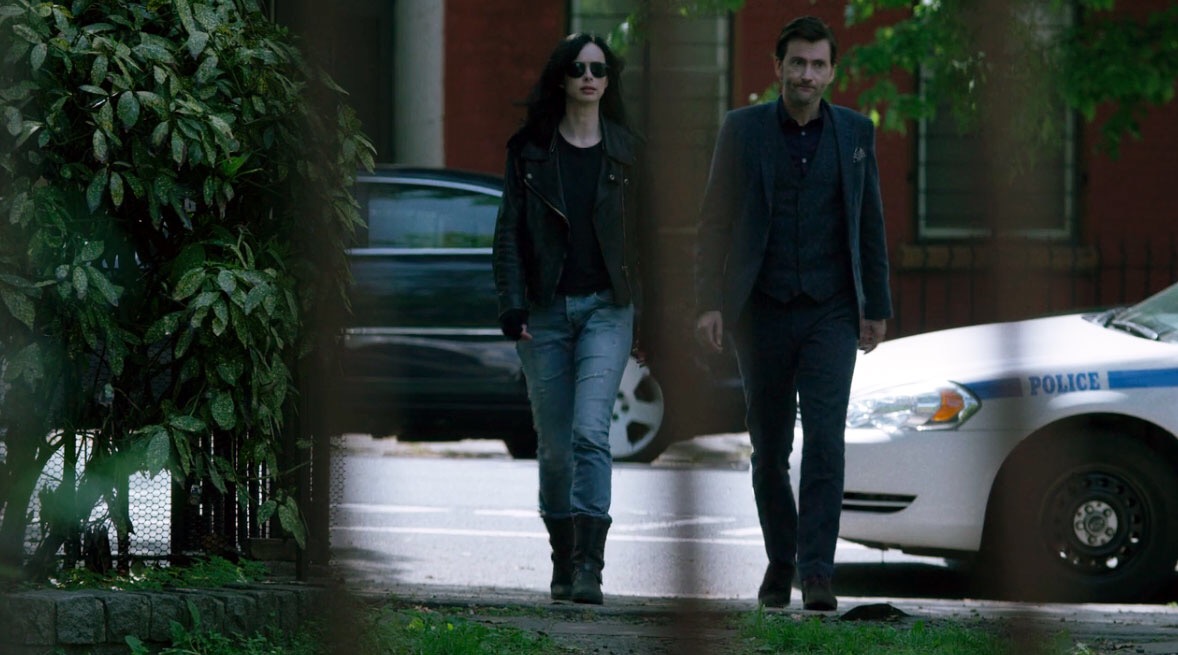 I had more dreams and there was more to this dream, but I did not record them and I woke up suddenly so now I can only remember part of the end of this dream.

My memory is unclear in some parts but I think that at the end of the dream I had tried to help several people with several different things including my mom who was possibly having computer problems or some kind of other technical problem.

After talking with my mom and / or whoever, I think that I got a mobile phone call from the character Jessica Jones (played by the actress Krysten Ritter) from the television show Jessica Jones, and she wanted me to help her with something so maybe I met her along the highway and maybe we walked the rest of the way.

Jessica was walking ahead of me as we walked on the grass on the right side of the highway, I remember thinking and daydreaming about various things like trying to figure out how to help my mom and / or the others with their various issues like the technical / computer problem as Jessica was trying to explain what she needed my help with, and so I only heard a few things that she said.

She noticed that I was not completely paying attention so she stopped, smiled, and made a joke about me not listening so I apologized and admitted that she was correct and I told her what I was thinking and daydreaming about.

Then I told her the few things that I did hear her say like: dead body found, probably murdered, possibly female, possibly a woman with light-color skin, and maybe her family had paid Jessica to investigate this since she is a private investigator (PI).

I was correct but Jessica did not want to explain everything again, and so she said that I would see when we get there.

We reached a metal one-story building that was in a field to the right of the highway, which is the side that we were on, and I followed Jessica inside.

The inside of the building somewhat reminded me of a maintenance shop / a meat-packing facility / morgue, and I saw a man with light-color skin wearing an apron and gloves et cetera who was standing by some tables with a dead human body (corpse) and medical equipment like he was doing an autopsy so I guess he was a medical examiner and / or coroner or something like that.

Him and Jessica seemed to know each other, they said something to each other, he seemed to be doing an autopsy on the woman whose dead body was found, and maybe her arms and legs were cut off and cut up and some of her organs were out.

There was a nasty smell that caused me to gag but I did not vomit, I am not used to seeing dead bodies (especially ones cut up and open and being dissected), and so I probably looked away; Jessica was not bothered at all, and she started grabbing body parts to weigh them on a scale it seemed and she wanted me to grab a notepad and pencil and record the weights and measurements et cetera.

Jessica did not give me time to get gloves or a dust mask or anything and she was only wearing her open gloves where her fingers are out so she was touching the body parts directly with her fingers oddly, I did not want to take the extra gloves and dust masks that belonged to the medical examiner / coroner (I was not sure if that was okay or not) and I did not have time to go to my automobile to get mine, and so I looked around but Jessica continued without me and continued calling out weights and measurements even though I was not ready.

I grabbed a notepad and pencil, I told her that I was not ready but she did not stop, so I felt like I was failing her and missing important data; and so this was not a good impression that I was making here.

As I fumbled trying to get the notepad and pencil, which had some clear tape et cetera stuck to it that I was trying to get off so that I could use the notepad, I noticed lots of people showing up and lining up like maybe they were there to help ID (identify) corpses of possible family / friends / et cetera.

I doubted that this many people would be showing up at the same time to do this so I wondered why were some many people showing up, some of the tape fell and got stuck to the side of one of one of the shoes that belonged to a man who looked exactly like my former male classmate JF, but I probably did not recognize him as JF because I was not sure and / or was distracted and / or somehow I knew that it was not really him.

I apologized to the man and I removed the tape as I continued fumbling with the notepad and pencil and tape trying to get back to Jessica to take notes, but then another piece of tape got stuck to the man’s shoe but this time it was stuck to the bottom of his shoe.

I apologized again and I removed the tape from the bottom of his shoe, and as I was walking away the man said something like this in a creepy serial killer-like higher-pitched somewhat child-like man voice that maybe slightly sounded like JF without being him probably:

“This guy keeps apologizing, *laughs*, *smiles, and says under his breath*: I guess I’ll kill him.”

I found his voice and what he said and how he acted to be creepy and strange, for a second I assumed that he was joking, but then I stopped because I felt that maybe he was not joking.

I wondered if he was the person who possibly murdered the woman and / or other people, was he a serial killer or something, but I woke up before I could walk over to tell Jessica about this and write down the weights and measurements.