This dream involved me being inside a shopping mall.

I remember seeing that my automobile was parked outside in the parking lot because there were some glass walls / doors that I could see through, and I met my former male classmate BH.

At some point, some high school jocks wearing letterman jackets (letter jackets) approached BH, and they started bullying him; so I went to deal with them.

END_OF_DOCUMENT_TOKEN_TO_BE_REPLACED 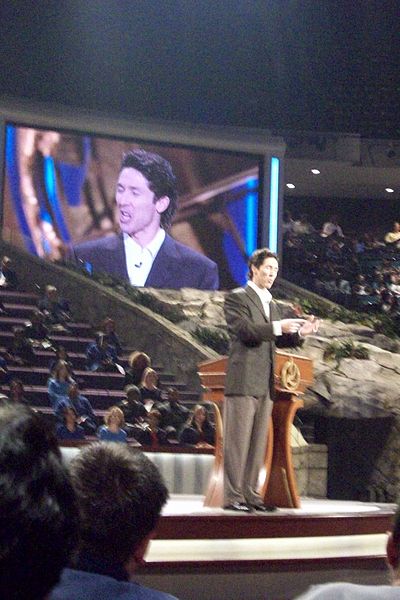 Last night I remember two dreams, and the first dream took place at a fictional version of Lakewood Church.

It did look like Lakewood Church, I have been to the real church twice but I think they have a new and bigger church now.

I do not remember who was preaching or what was going on, but I think it was a normal church service and I think I was there with my family.

I remember walking to a hallway that had two bathrooms and on the other side of the hallway was another church.

This church was only one room and was connected to Lakewood Church by a hallway, which is strange, I think it was empty so I walked around in there thinking or something, I guess I did not feel like going back to the church service or something.

The other building seemed to be a hallway with apartments, so I guess this church was connected to an apartment building.

It seemed like a cheap apartment, and as I was looking in the hallway I noticed people started coming inside the church, a few people were coming ever few minutes.

I walked around the apartment a little, but I can not remember what I saw.

I think I saw a few people, and maybe someone I went to my high school.

I went back to the church and there was a lot more people there and they started having a church service, except it did not seem like a normal church service to me.

I had the feeling they were Lutheran or some other Protestant group that I did know much about.

There was a variety of people there, and then things got a little weird like an extreme Pentecostal church service.

People were jumping, dancing, falling, probably speaking in tongues, clapping, praying loudly, and stuff like that.

But the noise was loud and the building was shaking like someone had big speakers, an earthquake, or many people jumping.

I decided to leave and go through the hallway back to Lakewood Church, it was hard to walk because of all the shaking and noise, I had to try hard to keep walking, it was weird.

Once I got to the hallway, I noticed Lakewood’s Pastor Joel Osteen was walking out of the bathroom and one of my little brothers came out of the bathroom too, Mr. Osteen seemed to have his same relaxed, nice, and peaceful personality; and for some reason I could feel a relaxed and peaceful feeling similar to the few dreams that had my grandmother in them but not so strong, I think this may be an important piece of information that will help me understand this dream better.

He was saying something and I think he was going to show my brother the way back to the Lakewood Church service, I just stood and watched.

After they left I went back to the Lakewood Church service too, but for some reason all the church people were gone and I did not see my brother or Mr. Osteen.

Also I think I found what was causing the building to shake, there was super load music and a lot of high school and/or college students jumping up and down like at a party or something.

Most of them had on Letterman jackets or jackets with their school emblems and school colors, and they all may have been guys like some fraternity or something.

I walked by and noticed one of my cousins, M, and I remember people started leaving & I think I saw my family but I went outside to talk with my cousin.

I do not know what we were talking about but I remember him getting mad and we started fighting, and I won by putting him in an arm bar submission and he gave up.

Then for some reason I was no longer there, and two other guys were fighting instead of us and I was watching it like I was invisible or watching TV or something.

They fought a few times and one of the guys kept winning, and the other guy got very mad, there even was a referee there.

Things got real serious when one of the guys tried to break the other guy’s arm, so the referee stopped the fight and an argument started.

Then I switched to another dream, in this dream I was at the Fire Mountain buffet restaurant in LC.

I was in the parking lot in my automobile and I went inside to eat, something happened so I left out of the building after only eating a bit of food.

I then started thinking about what places in LC I should eat at every week, it seemed that I was just getting back to LC to start college, work, and live there again.

I think drove toward the M Soccer field, but I stopped by the apartments next to Fire Mountain and started to look around.

The apartments looked different and weird I think, I can only remember seeing some glass or something, like the building had some strange artistic style made from glass and other modern style materials.

Then I thought about going to look around M, and I started feeling nervous about my return to LC.