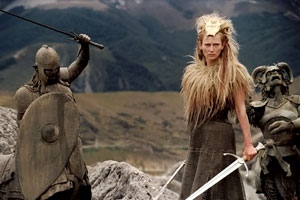 I remember some of my last dream which started at night in an apartment, and the apartment was being attacked.

This part is unclear but I think that a few of the people in the apartment and I went around the apartment fighting the threats, trying to save people, hiding, and running.

Most of the people were too afraid to help us and so only a few of us were trying to help & save people, and moving around the apartment was dangerous & a bit scary.

At some point my group got attacked and we all got divided, and we ran to different floors in the apartment; and only some of us probably survived.

I am not sure what happened exactly but I think that John Mitchell from the BBC TV show Being Human, three women, and I were the only people left in our group; and we cleared a corner on one of the apartment floors, we each picked a separate room right next to each other, we put one person on guard out in the hallway, we came up with some rules, and the dream jumped to a few days later.

I remember Mitchell and I checking the hallway while talking, and we both seemed to be in charge of our group; and Mitchell was a vampire like on the TV show, but I was Human.

There was a guard desk in the hallway with a woman on guard, and her back was against the wall so that the threats could not flank her from behind; it seemed that we each took turns on guard duty or something.

It seemed that we had rationed food & water for days, but we still tried to live our normal lives oddly; and so the other members of our group were gone to work or something, even though the apartment building still was not safe.

It seemed that our plan was to slowly defend and clear our entire floor, and then slowly do the same for the entire apartment; and we had lived in lockdown mode for days, but we still left the apartment sometimes oddly.

While checking the hallway & talking, Mitchell and I heard a noise in one of the apartment rooms, and so we went to investigate; and the room was unlocked, which was against our lockdown rules, the room belonged to one of the woman in our group.

Inside the room we found several puppies and kittens playing together in the room, which was also against lock-down rules, and I remember Mitchell saying something like: “Women! While we are following the lockdown rules & trying to survive, they are breaking the rules and hiding puppies & kittens, because they are lonely!”.

Pets were against the lockdown rules because the extra noise would attract the threats & pets would waste more food & water, and so Mitchell said that we needed to talk with the others about the situation when they got back from work or where ever they were.

As we walked back into the hallway, Mitchell sensed something & he told the guard & I to be quiet & to not move, and I saw a memory appear in his mind somehow: “Mitchell was talking with a group of vampires & one of the vampires was trying to get Mitchell to join them but Mitchell refused, and so the vampires threatened to attack his human friends in the future.”.

Mitchell said that he sensed some vampires, and he started to run & he told us to follow him; and we ran into one of the rooms to look out of the windows, and we saw some vampires outside of the apartment, climbing on the building to sneak to our floor.

Mitchell and the guard started to run to the emergency exit, and I decided to bust open a window instead & I jumped out of it; and I climbed down to the ground.

On the ground the area looked like the side of my parent’s house, and the head vampire was standing there with a few guards; and then Mitchell and the female guard arrived, surrounded by some vampires.

It seemed that various beings were coming together into an army and they were killing everyone that would not join them or something, and I think that the threats that attacked the apartment earlier, were part of this army; which had humans, vampires, and many other type of beings.

On the other side of my parent’s yard a small army of soldiers in metal armor were arriving, and they were cheering for the leader of the army as he walked into the yard; and the leader looked like a mix of Poseidon & Zeus in human form, and he was wearing metal armor & he had a trident that could shoot lightning I think.

The leader refused to end his conquest and so I was going to have to fight him to save us, and the leader of the army showed off some of his power by shooting lightning bolts in the sky & maybe something else; and his soldiers cheered.

I grabbed a broom or rake, I let all my fear fade away, and I came up with a plan: I hoped that the leader of the army was just a Human that had special powers because of the trident, I decided to start powering up, I would try to knock the trident out of the leader of the army’s hand, and I would beat him to death as quickly as possible so that he could not use his powers & to make sure that he was dead if he was a God or Demi-God.

To his surprise & to his soldiers surprise & to my surprise, my attacks/hits stunned him and he fell to the ground, and I grabbed his trident; and I started to beat him to death with his trident and/or my broom or rake.

I was then told that the situation was not over, that I had only killed the leader of one army/one part of the real army, and that the full army was led by a powerful being; who in my mind I imagined being/looking like Queen Jadis / The White Witch from The Chronicles Of Narnia, a powerful / non-human female being / that was taller than a human / overconfident / mean / ruthless / had powers / liked to control things from her castle while others did most of the dirty work / and that she was a great warrior that loved to lead her main army in battle from the front lines.

I was given a horse, armor, shield, weapons, and my army & I marched to join the survivors in the last battle to defend against the army that was conquering.

We reached the field near the park in D and the main characters from The Chronicles Of Narnia came with their armies of humans and various non-human beings, and they joined us; we were the last surviving defenders of the land(s), and we prepared to face the larger army that was controlled by the powerful being (who I never did get to see, but I imagined it / her being Queen Jadis / The White Witch).

The army was overconfident since they had us outnumbered and because the powerful being was going to be leading them in the battle, they seemed to think that no one could defeat the powerful being in battle, and they felt that they would have an easy victory.

Peter Pevensie, some guards, and I rode our horses to talk to the officers of the other army; but the officers under the powerful being were not there yet, and so we waited by their army for them to arrive.

A parade began for the officers of the other army and the officers guards rode by our armies to create a defensive wall, as their officers rode by, and to my surprise, the officers were a fake British Royal Family; and they had come to watch the battle on the battlefield, because they were so overconfident.

I started to talk with them and I noticed that there were stadium seats across the road, and people were watching the parade for the other army; and some the cast members playing the Royal Family and I took a break, and we went sat in the stadium seats to talk. 😀

At this point I could no longer see the parade for the other army and I could not see our armies, and I was only focused on talking & looking at the crowd; and at some point a fight started in the crowd between my cousin ME and his cousin B, but some of their friends broke up the fight, and they both were moved to somewhere else in Walmart.

So I went walking around Walmart to see if my cousin ME was okay, as I waited for the other army to be finished with their parade, but I woke up.